As we were walking to the first workshop, I had no idea what to expect. How many people were going to show up? Would we get weird looks from the Italians? Would the Italians accept us or would we be treated like strangers? Would we accomplish anything? Would this workshop be a waste of time?

The workshop was actually an incredible experience and I feel very privileged that I was able to attend. My class got to see the first seed. The seed that would eventually grow into a full functioning space where the people of Borgo Bello would spend (hopefully) a lot of their time at.

My job during the workshop was to hand out the different papers, sticky notes, pens, and assist in anyway possible the large handful of people who actually attended the workshop. I want to focus on the large group of older women in the back of the room. Not only were these women completely intimidating, they seemed frustrated, and I wanted to know why. At first, I thought that I had somehow insulted these women, but later I realized that they were misinformed about the purpose of the meeting. I felt like I was physically and literally behind the scenes because at some points I was actually in the back of the room. But I slowly realized that the women became softer, and opened up more as they realized that their voice would actually be heard. I was really transfixed on this sudden change of almost hostile behavior, to an eagerness to participate. As a Sociology and Education double major, I guess you could say that I’m a geek for people watching.

Another spot I want to bring up is that even though there was a language barrier between my classmates and the Italians, we understood the vibe in the room. Each person speaking had a roomful of their neighbors, friends, and strangers completely respecting their time to voice their thoughts. In the beginning of the workshop, it was a roomful of loud Italians, which isn’t surprising of course. But when it came time to have individual voices, instead of the loud clutter, I was speechless to find that in a culture of blunt (and constant interruption) communication, there could be an individual voice.

I’m really excited to go to the next workshop. My favorite classes are when we can actually witness change occurring, and I think that in this first workshop, that’s exactly what happened. 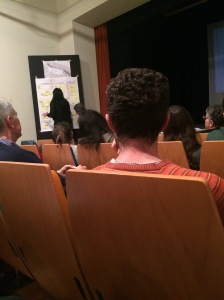 This entry was posted in Class Journal and tagged Borgo Bello, Fall 2015, Journal 4. Bookmark the permalink.

This site uses Akismet to reduce spam. Learn how your comment data is processed.